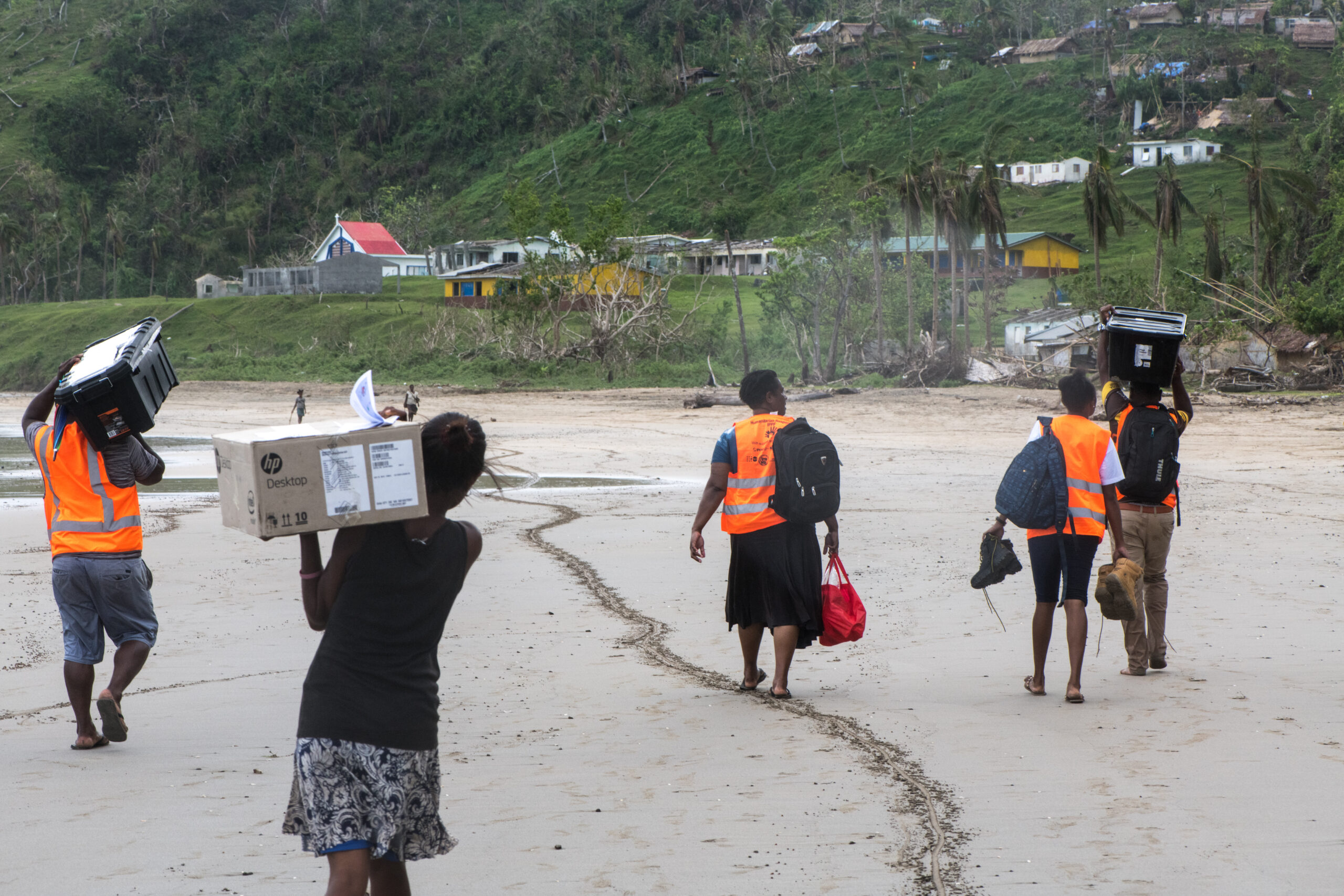 To the end of the road—and beyond

“No matter how the journey starts,” says Cherol Iatika, “it always ends by walking.”

Cherol is a team leader for the Vanuatu Family Health Association. Her mission is to provide sexual and reproductive information, counselling and treatment for women and girls on the cyclone-ravaged island of Pentecost.

At the best of times, the rainy, mountainous island has some of the most difficult terrain in Vanuatu. When the eye of category 5 cyclone Harold passed over the southern half of the island, it played havoc with the island’s roads, buildings and forests. Reaching the affected population would have been difficult at the best of times. Now it’s much harder.

Cherol is on a solo mission today, conducting an assessment visit to one of the most remote villages on the island. Getting to Baie Barrier from the Emergency Operations Centre in Melsisi village entails an hours-long truck ride along back-breaking roads, and then a couple of hours in an open boat navigating the chaotic swell at the southern tip of the island.

She’s got to make it back by nightfall, so time is short.

The only real thoroughfare on this half of the island is a single lane track hugging a ribbon of relatively flat land on the west coast. It traverses countless rivers and streams, and since the cyclone washed away key stretches, forces trucks to run across the bare shingle beaches, too.

The only vehicles operating here are 4×4 utes. Passengers ride in the back with the cargo, causing even veterans like Cherol to wince at the mere prospect.

But that’s just to get to the start of the real journey. Pentecost’s southernmost communities are accessible only by walking or by sea. This leaves the health team that Cherol has joined with no choice. They only way they can transport their medicines and materials is by open boat.

As the team cool their heels on the shore, a tiny dot appears around the farthest point. Cherol’s ride has arrived. Life jackets are donned and the goods are stored under the covered bow.

“Will there be spray?” asks one first-time passenger.

The pilot suppresses a grin. “Yes,” he says.

As the boat skips sprightly along the waves, it begins gently rising and falling as the ocean swell begins. The pilot can’t contain himself any more. With a manic grin he asks, “You alright? Good, because this is the easy part!”

Half an hour later, the passengers smiles have disappeared. The boat is rollicking across waves taller than a human, slamming to and churning its way along. Bucket loads of spray drenches the boat.

Finally, though, the boat rounds island’s southernmost point—a highly tabu place, according to Pentecost tradition—and as the swells subside, the destination comes into view. A knuckle-whitening passage through the reef, and they’re home.

No matter how the journey starts, it always ends by walking. The passengers unload their cargo on the broad strand, and with the help of half a dozen helpful villagers, hike it up the vertiginous hillside to the nursing station.

Time is short, but Cherol finds time to discuss her team’s work. The standard of care in Baie Barrier is “not quite up to the standard that people should be receiving.” The village is only accessible by foot or by boat, “and that depends very much on the weather.”

“Our purpose here today is to assess,” she says. “We’ll be coming back in a week’s time.”

Access in places like this to sexual and reproductive health services is “very low. Very low. Going into the interior part of the island, it will be more interesting, because there’s less services going to the level of the people.”

“We have noticed also the age of women bearing children are very very young.”

It’s common to see very large family sizes remote communities such as this. “Some women have 9 or 10 children,” says Cherol.

There’s another bumpy boat ride ahead, and a truck ride home under the stars before Cherol can rest today, but the job is essential, and she’s determined to see it done well.